Morrison Knudsen Tunnels
In 1948, the MK Tunnels were a top secret government experiment in the western states to have a labyrinth of tunnels for safety (according to some sources) for the inevitable bombing by the USSR, not even the Department of Defense employees building knew what the purpose was. But now anyone can find the MK Tunnels just outside of Price, Utah in the San Rafael Swell. They are easy to spot along the Buckhorn Wash road and any vehicle can get to them (we drove to them in our minivan); although, I imagine the road could get sketchy with rain. My family loved spotting the tunnels/caves along the ridge of the sandstone hills and then stopping, jumping out of the van and exploring these tunnels.  (for more info on the tunnels visit: http://coldwartourist.com/mk_tunnels ) 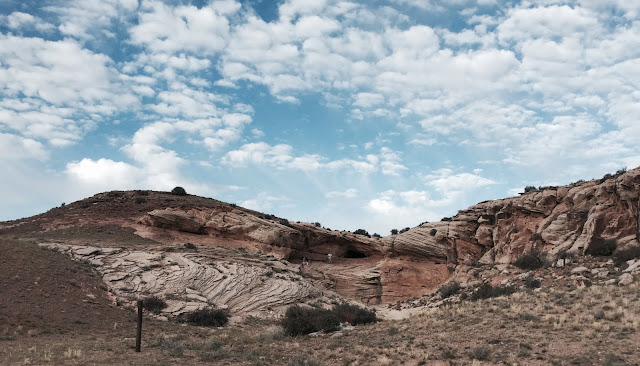 Some of the tunnels had grates placed over the openings, but they were not locked and were easily opened (we assumed it was legal - we did see another large group of people go into them as well) - we are pretty sure that the grates were in place to keep wild animals out of the tunnels. We, of course, had to talk up the spooky factor by sharing a made-up story of the poor children that had to dig the tunnels and then died before the completion and then we shut off the flashlights! Oooh! When we turned on the lights, we startled a bat and that gave all of us quite the fright! Perfect for the beginning on Halloween season! (fear factor 3 out of 10, but could be more if you play it up right) 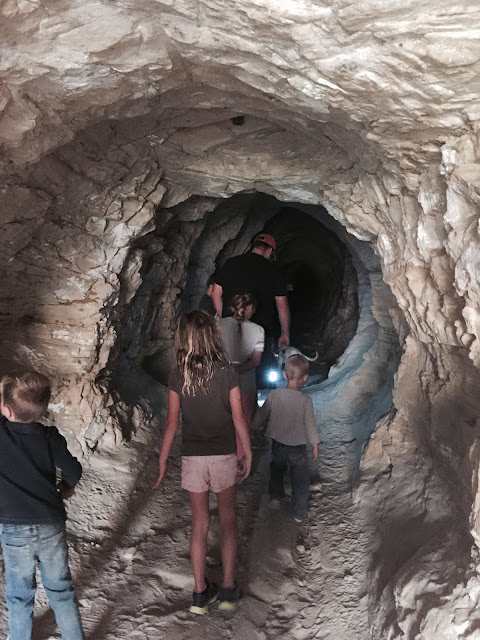 The tunnels were not long, nor very large, but they were super fun to explore. We even planned ahead of time and brought with us fixings for a yummy dutch oven dinner and bonfire out along the wash. It was really an incredible day trip! 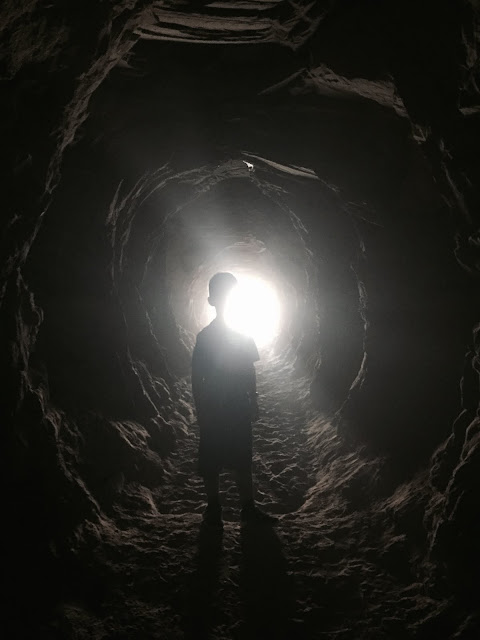 The Price Wave Pool is really a gem that we just discovered while researching unique things to do in this area. In the summer, the pool is outside, but for the fall, winter and spring, they put a bubble over the top of it. The wave pool is heated and they provide inner tubes to float and play in. But really the magic of this wave pool is at Halloween...(fear factor a 2 out of 10 depending on the movie they choose) 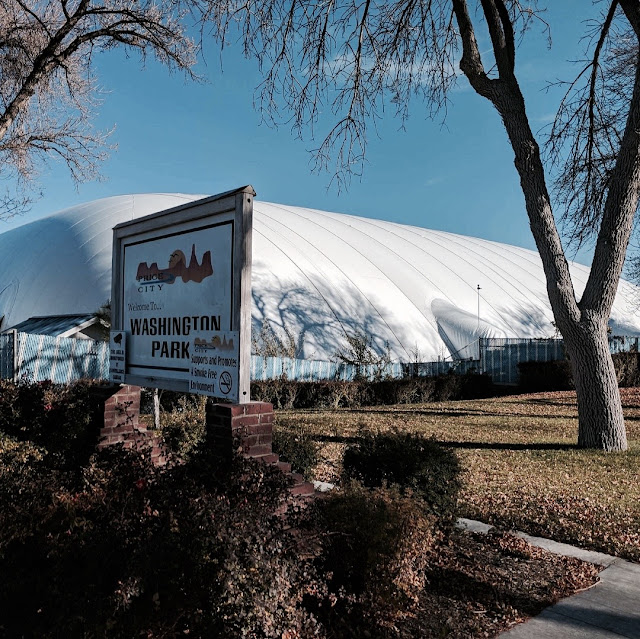 ...they show a spooky movie ON the bubble ceiling! How cool is that?! The movie will be played on October 27, 28, 30 and 31st. We are definitely going to go back for that experience. 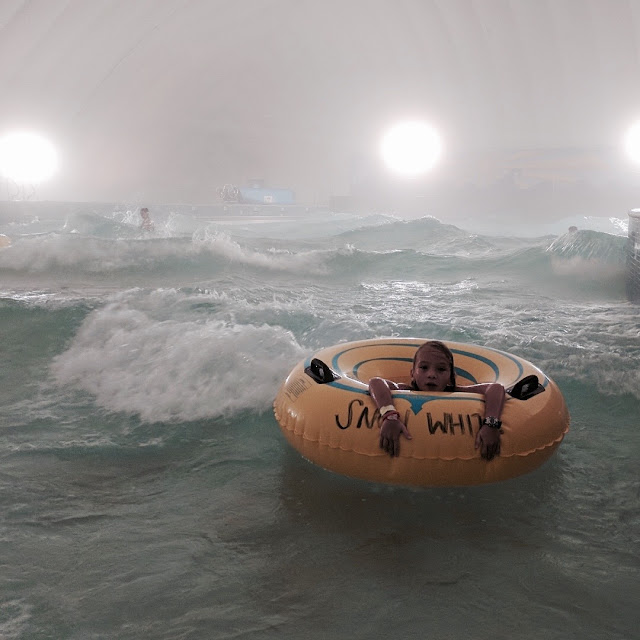 And let's be honest, as a parent, sometimes it is just nice to watch what is happening and these deck chairs are just perfect for that! We are really thrilled that we found this gem of a pool and plan to visit often! 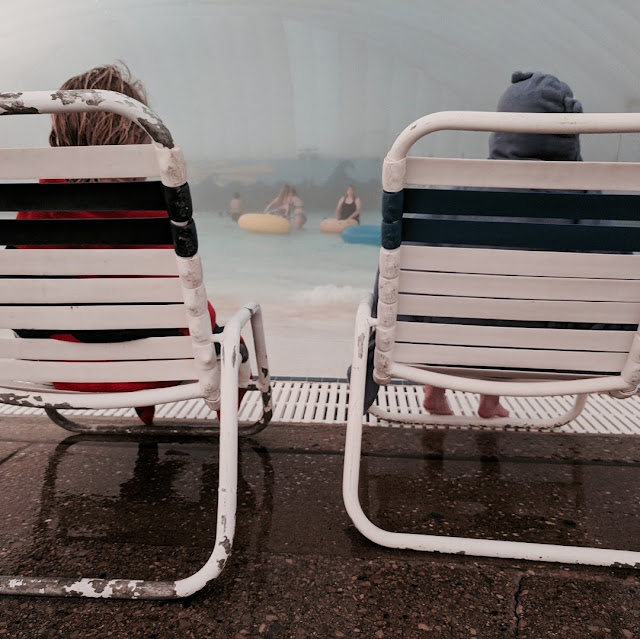 The Elberta Slant Tunnel is an old abandoned train tunnel, so it is ginormous! Just google it and it'll give directions to the Elberta Slant Road, and if you follow that road, just before you enter the canyon, turn right at an obvious hill and head up that way for about 1/3 of a mile - you cannot miss the tunnel. If our minivan can make it, any car can, but I must warn you, it is a rough road and honestly, a high clearance vehicle would have been swell. 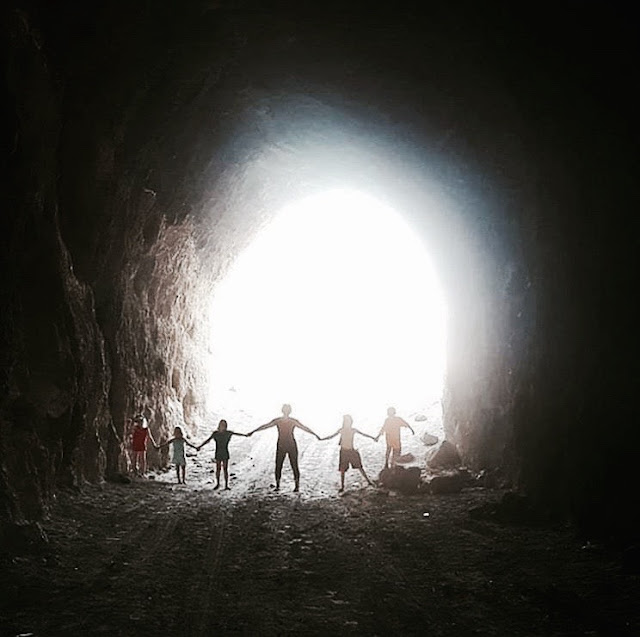 Our kiddos really liked to go into this tunnel and I wish we would've planned to bring marshmallows and firewood and built a fire in that huge tunnel while we watched the sunset, but alas, we didn't...perhaps another time. 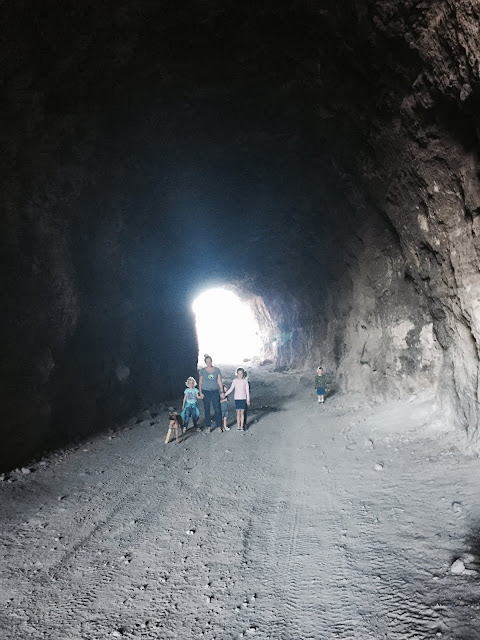 I mean, just look at the size of that! It would have been cool to see/hear/feel an actual train pass through...this wasn't necessarily high on the fear factor a 1 out of 10. (if you want a good read on it, check out this blog: https://jacobbarlow.com/2016/08/24/elberta-slant-train-tunnel/ ) 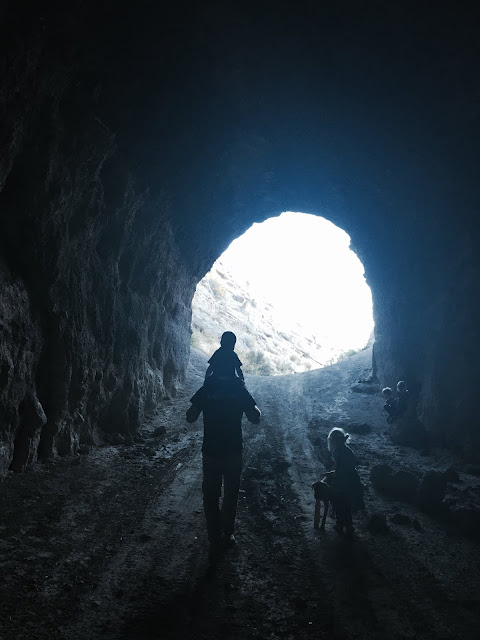 And since you are out in Elberta, you'll have to pass through Santaquin and you really really need to stop at Leslie's Family Tree Restaurant and order scones and their honey butter (HUGE and the very best honey butter I have had). The food was delicious and the atmosphere was charming - Leslie is the perfect host and so kind. She is very open about sharing the history of the ghosts and her personal experiences with them. 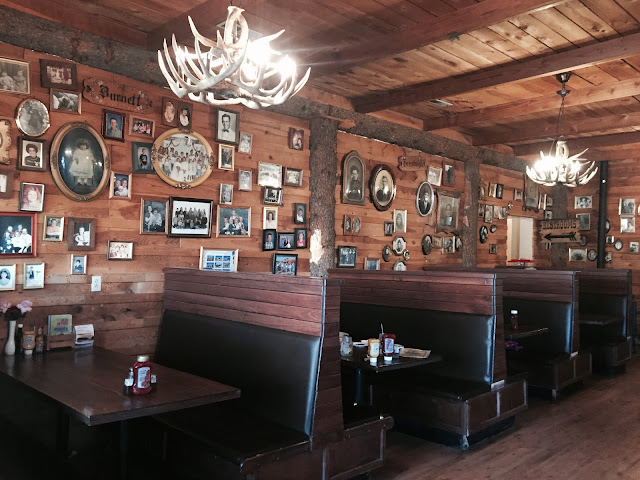 One of the stories Leslie shared was about a tall man in a duster coat that asked her a question, she was busy and said that she'd help him in a few minutes and so she finished what she was doing, then turned to follow him. As she was following him, they rounded a corner and he flat out disappeared!!! WHAT?! YES!! She didn't know what to think or do...there were several other stories, that you just need to hear from her to believe.  After eating a salad and scone, Leslie took me to the back part of the restaurant/parlor where most of the "extra activity" takes place and boy oh boy! It was creepy!!! There was definitely a different feel to this area... 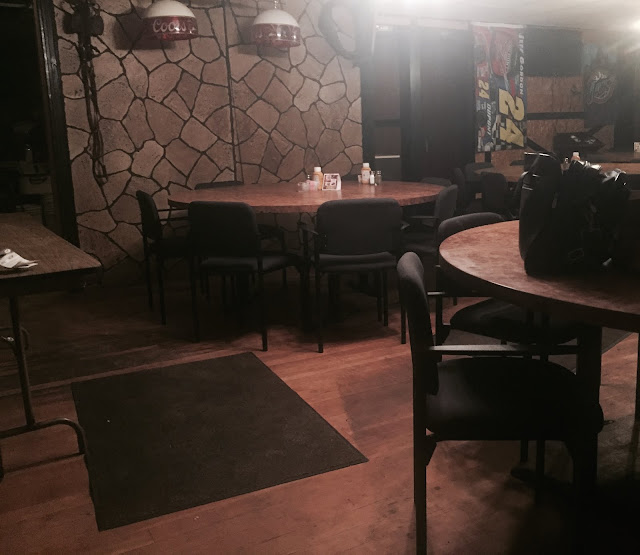 But the creepiness didn't stop there; in fact, it got more intense as she showed me to the very back and the trap door that led to the root cellar. Apparently, if you go on a weekend for a Ghost Tour ($40/dinner included), you head down these stairs and they pull out the EVP readers and other equipment and you can experience all the paranormal activity for yourself. I am a big fat chicken, so that was not going to be happening...but I really think YOU should go and try it out!! (fear factor 10 out of 10) 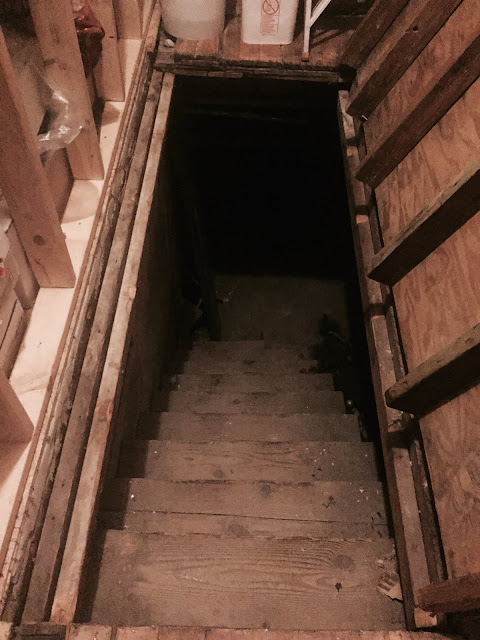 The Park City Ghost Tours were an absolute treat! They are held every night of the year and was such a perfect mix of history and story telling. It was impressive! John was our tour guide and he did a splendid job interweaving the real ghost stories and history behind each ghost building. The men behind the company really did their ground work and discovered that there were two commonalities with each ghost: 1. each ghost met a violent death and 2. each ghost had a connection with that building. 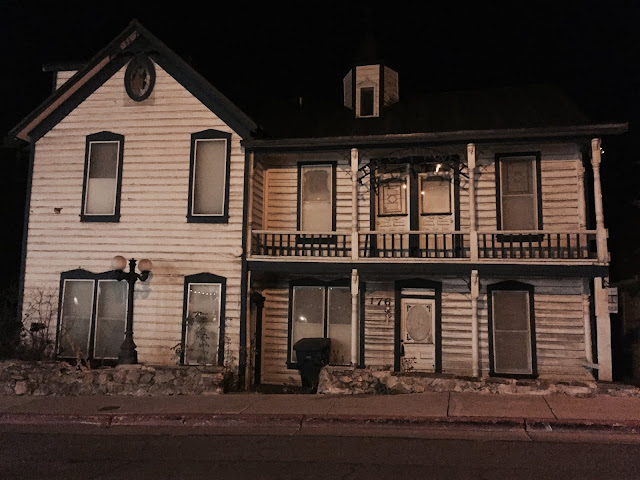 As we walked along the streets of downtown Park City, we'd stop at certain buildings to learn about the ghost that lived there. John was so good at drawing us into the story and feeling the creeps and then also really good at breaking the tension by waving good-bye to the ghost before heading to the next stop. 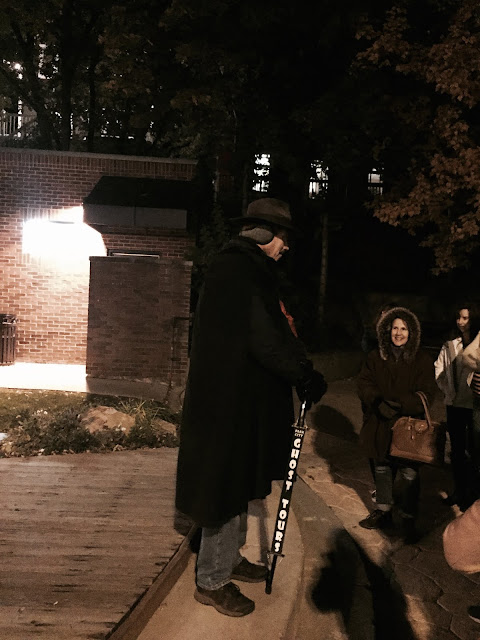 Because I am a big fat chicken, I really appreciated the walking between stories/buildings to help break the tension of the scariness. It was a really really fun night! (fear factor 8 out of 10) 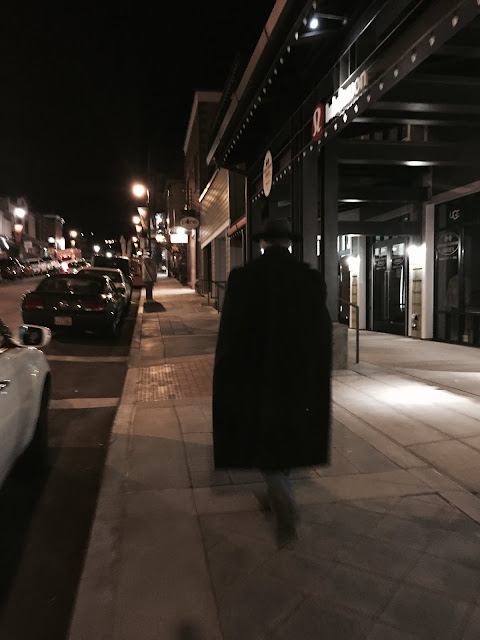 The Pedal Provo Ghost Tours are a really interesting take on ghost tours as you pedal your way to each stop on your bike. I love to bike, so this was an absolute treat. We met in the Provo Cemetery (they email specific location to you as there is no address for the cemetery meeting spot) and then we listen to stories at different spots all over Provo. Again, I was grateful for the break in tension of the morbid story-telling by biking between stops. 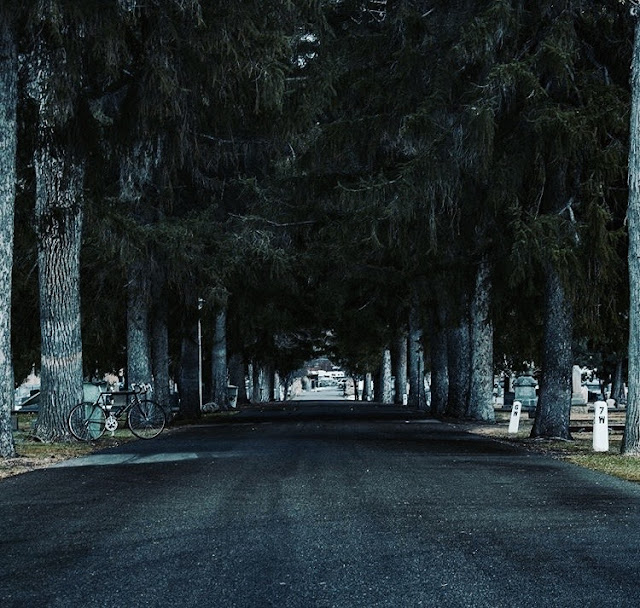 I would recommend older children and adults because you do cross some busy streets, but it was so cool to learn about the scary side of the center of Happy Valley. (fear factor 7 out of 10) 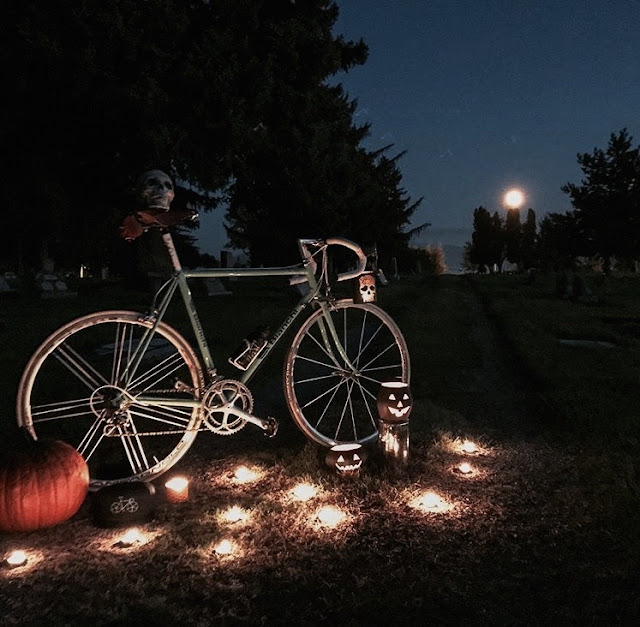 Mill Fork Cemetery
The Mill Fork Cemetery is located up Spanish Fork Canyon about two miles before Soldier Summit. It is on the north side of Highway 6 and is an ancient mining cemetery. I don't know any history about it, but as the sun set on this aging cemetery, the fear factor increased with the moaning winds. 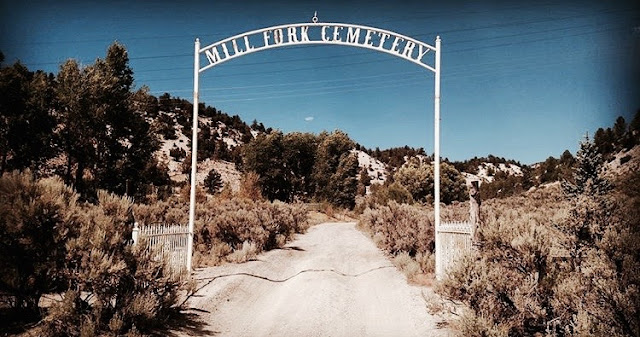 It was fun to walk around and explore, although I am not so sure I would trust that creaky old bridge, so we just took pictures from afar. 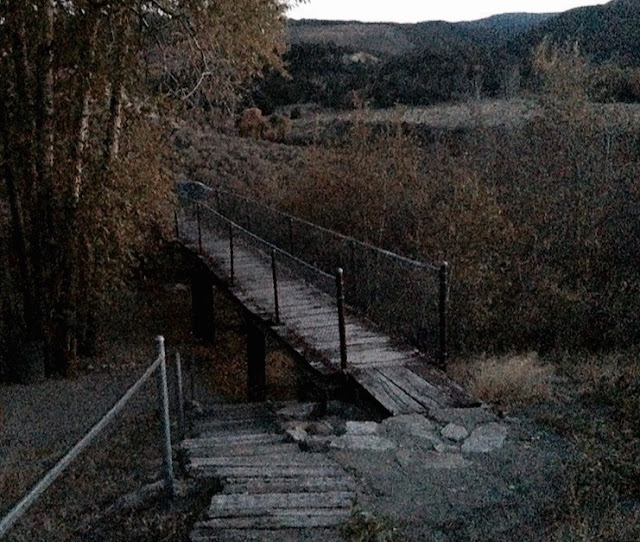 It was fun to use our imagination on who M.E. was and what happened to him and why there was no date on his tombstone...creepy! I typically like cemeteries, but this one gave me the heebie-jeebies...go and let me know if you agree! (fear factor a 6 out of 10) 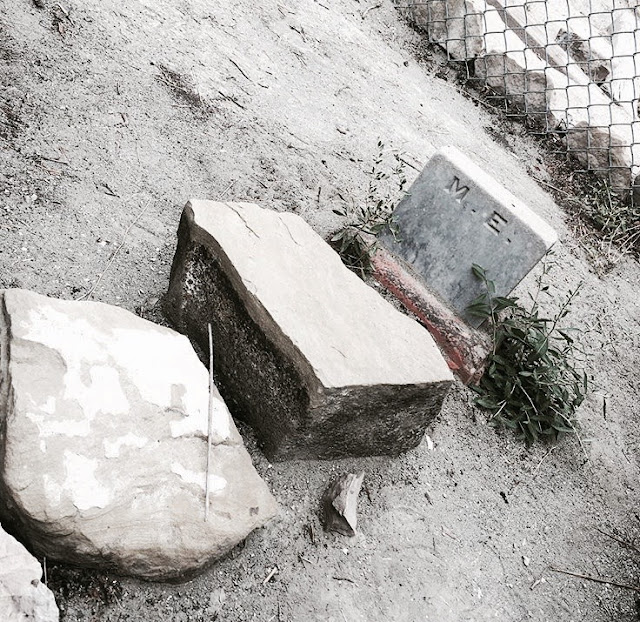 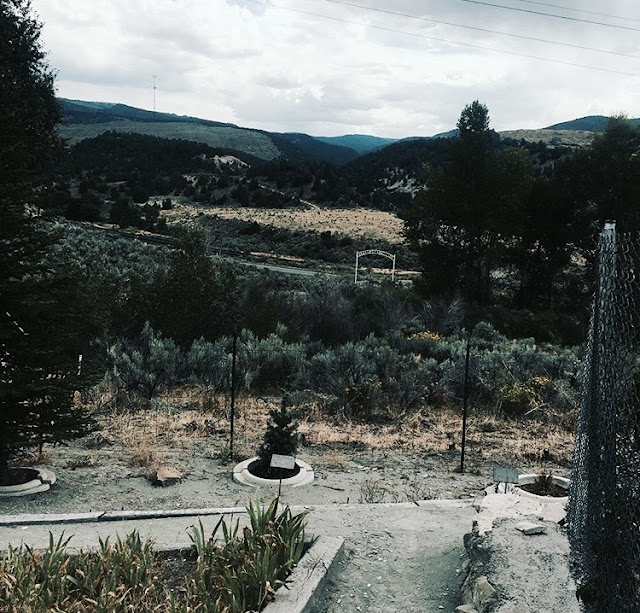 
Posted by Wanderingfamilies at 8:18 PM